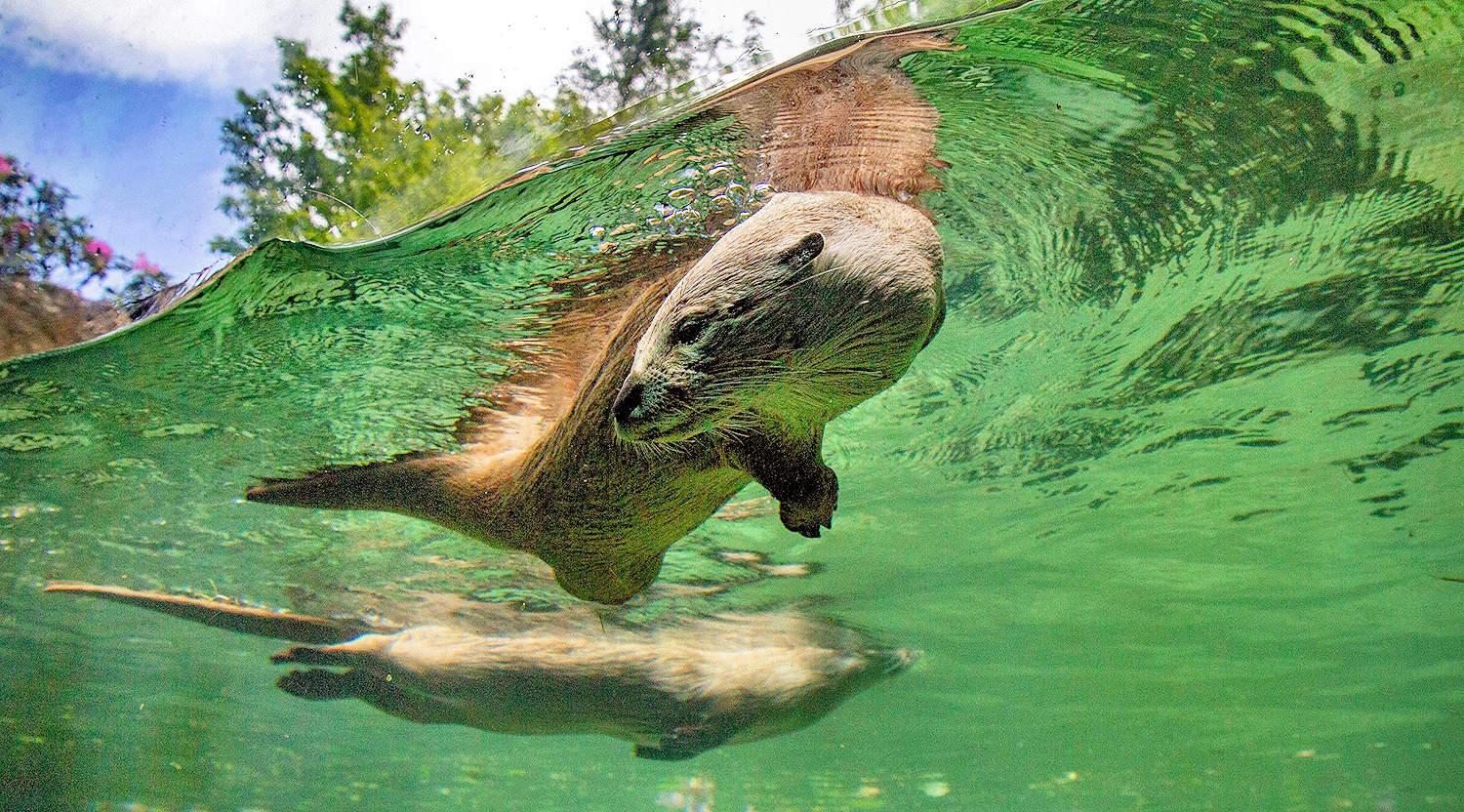 Early European settlers trapped otters for their fur. By the early 1900s, river otters had disappeared from much of their historic range due to over trapping. In the 20th century, loss of habitat from wetland drainage and water pollution have added to the pressures on a species that was once the most widely distributed mammal in the United States and Canada. Watch our river otters at Grandfather Mountain in the Wildlife Habitats.

More About River Otters
Along with weasels and minks, the river otter belongs to the Mustelidae family. Otters are characterized by an elongated body with short, sturdy legs. They weight 11 to 23 pounds and are much larger than other mustelids. Males are usually about 17 percent larger than females.

Otters have a sleek body with a short, blunt snout, a thick neck, and a thick tail that is flattened on the top and tapers to a point. The waterproof fur is short and dense. It is generally dark brown with light brown coloring under the neck, chest, and stomach. Otter feet have five toes with non-retractable claws and webbing between each toe. The heel pads on the hind feet are adapted to provide better traction on slippery surfaces.

Small eyes and ears are located high on the otters’ heads for surface swimming. Nearsightedness may be an adaptation to improve underwater vision, and highly sensitive whiskers aid in the capture of prey in murky water or dark nights.

These acrobats are excellent swimmers and are able to swim forward or backward. They often tread water to look and listen, or float on their backs to eat small fish. Submerged otters undergo a slowed heart rate to conserve oxygen, but they can remain submerged for only about four minutes at a time.

Otters can live in a variety of brackish and freshwater habitats ranging from warm, slow-moving coastal streams and marshes to cold an rapidly moving mountain streams. The aquatic predators feed primarily on small minnow-sized fish and crayfish, but also consume crabs, amphibians and a variety of other prey. Bands consisting of five to ten adult otters are occasionally observed, and two or more otters have been know to hunt cooperatively by herding fish.

Otters are nocturnal but may occasionally be seen in daylight hours. Grandfather Mountain’s otters are most active in the morning and late afternoon, preferring to nap during the heat of the day. Dens are often bank burrows vacated by other animals, but may also be located in log jams, natural cavities or thick vegetation. Otters do not settle into one den for an extended time unless they are raising young.

These charming creatures usually mate for life. Breeding in the spring, females exhibit a period of delayed implantation that lasts from 290 to 380 days. Add an active pregnancy of 60 to 63 days, and otter pups may be born more than a year after the female has been successfully bred.

Pups are born fully furred, but their eyes do not open for the first five weeks. They are weaned in three months and remain with the mother for almost a year. The young disperse when they are about eight months old, but siblings may remain together for several more months. Their life expectancy is 10-15 years.

Looking for a special gift? Adopt one of our Otters.