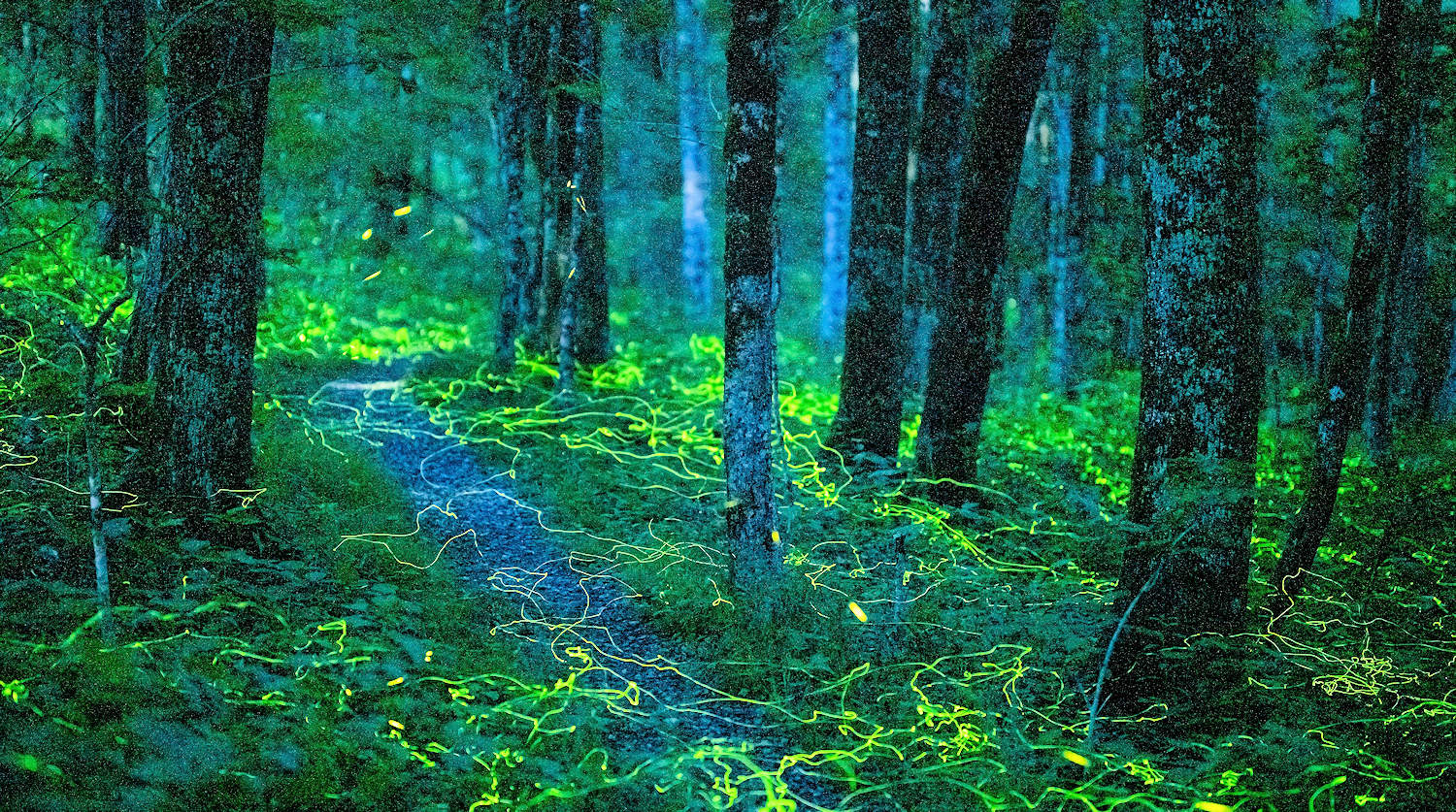 Research on Grandfather Mountain has confirmed the presence of 10 species of fireflies or illuminating insects:

Photinus carolinus – Synchronous Firefly
Synchronous firefly males produce a flash pattern of 5-10 single flashes, pause for approximately 10 seconds and repeat. Males will generally fly around 5-6 feet off the ground in search of a females who wait on the forest floor or perched on a blade of grass and respond with a flash of their own. In areas where population numbers are high, males will begin to flash in “synchrony” and produce a light train that resembles running Christmas lights. Most active toward the end of June. This species prefers the habitat of maturing cove hardwood forests in live in the forest interior. A large firefly – 0.4-0.6 inches long.

Phausis reticulata – Blue Ghost Firefly
Blue ghost males produce a bluish green light (the light is actually green, but appears blue to the human eye). Males fly low to the ground in search for flightless females on the forest floor. Males may shine a continuous glow for up to 15 seconds at a time. Most active between late May to mid-June. There are two distinct peaks of the mating season with the second peak being less abundant than the first peak. This species prefers a variety of Appalachian forest types ranging from moist and dry forests, along water and on high dry ridges. A tiny to small firefly – measuring 0.2-0.4 inches long.

Photinus macdermotti – Father Mac’s Firefly
The male individuals produce a doublet flash that is a couple seconds apart, followed by four second pause and then repeated. They fly low to the ground in search of females who perch on vegetation a few feet off the ground. Most active during late June. This species prefers the habitat of open, moist forests often near streams. A medium firefly – measuring 0.4 inches long.

Photinus ardens – Northern Ablaze Flash-train Firefly
The males produce a triplet flash, followed by 5-7 second pause, and then repeat. Females respond to these flashes with a doublet flash while perched on vegetation near the ground. This species is most active during late June. This species prefers the habitat of open fields or pastures. A medium firefly – measuring 0.4 inches long.

Photuris versicolor – Variable Triple Flash Firefly
The Photuris species are predatory fireflies – often coined “femme fatale.” Females often imitate the flash response of other species, only to pounce on an unsuspecting male (or female) to prey upon it. The males of this species produces a very fast triple flash, followed by a pause of around 5 seconds and repeated. This species is most common in June and July. It is a widespread and adaptable species that prefers many different types of habitats. A large firefly – 0.5 inches long.

Photuris tremulans – Christmas Lights Firefly
This species produces a greenish flash that occurs once every two-three seconds. Commonly stay high in the treetops. When present in large numbers, the flashing gives the impression of Christmas lights decorated within the trees. Females respond to the males with short singular flashes, but will willingly pounce on suspecting prey. Most common in June and July. Can be present in a variety of forest habitats, but prefers the forest edge along an opening, such as a field or meadow. A medium firefly – 0.4 inches long.

Pyractomena angulate – Candle Firefly
The males of this species produce an orange, stuttering flash that lasts for one second, pauses for 2-3 seconds and repeats. Their flash is generally angled diagonally upward or downward. Commonly observed flying between 6 feet high and the treetops. Females respond to the males’ flash while perched on vegetation 2-4 feet off the ground. Most common from June to July. Prefers interior forest habitats or along the forest edge. A large firefly – 0.5 inches long.

Ellychnia corrusca – Winter Firefly
Day active (diurnal) firefly that has no flash, no glow and no lantern on the body. Often seen in late fall and early winter on the trunks of trees or in early spring flying in the forest interior. Mating occurs during mid-March to early May. This species prefers the habitat of maturing hardwood forests and forest edges. A medium to large sized firefly – measuring 0.3-0.7 inches long.

Lucidota atra – Woodland Lucy Firefly
Day active (diurnal) firefly that has no flash, no glow, and no lantern on the body. This species’ long, flattened and segmented antennae are a distinguishable characteristic of the species. Individuals attract mates via the use of pheromones. Most active in the month of July. This species prefers the habitat of open forests. A medium sized firefly – measuring 0.3-0.4 inches long.

Orfelia feltoni – a glowworm
The larval form of a fungus gnat (the only species of fly in North America that has bioluminescent larva). The larvae have blue lanterns on the anterior (head) and posterior (tail) of its body. The blue light that it emits is the purest blue color of any terrestrial animal. This species is present along moist banks of streams and forested areas. The larvae feed on tiny insects that they trap in a web after luring them in with their blue lanterns.

Read about upcoming Firefly events and their presence on Grandfather Mountain.

As a UNESCO International Biosphere Reserve­­­­­, Grandfather Mountain has long been known for its natural wonders and as a haven for more than 70 rare or endangered species.