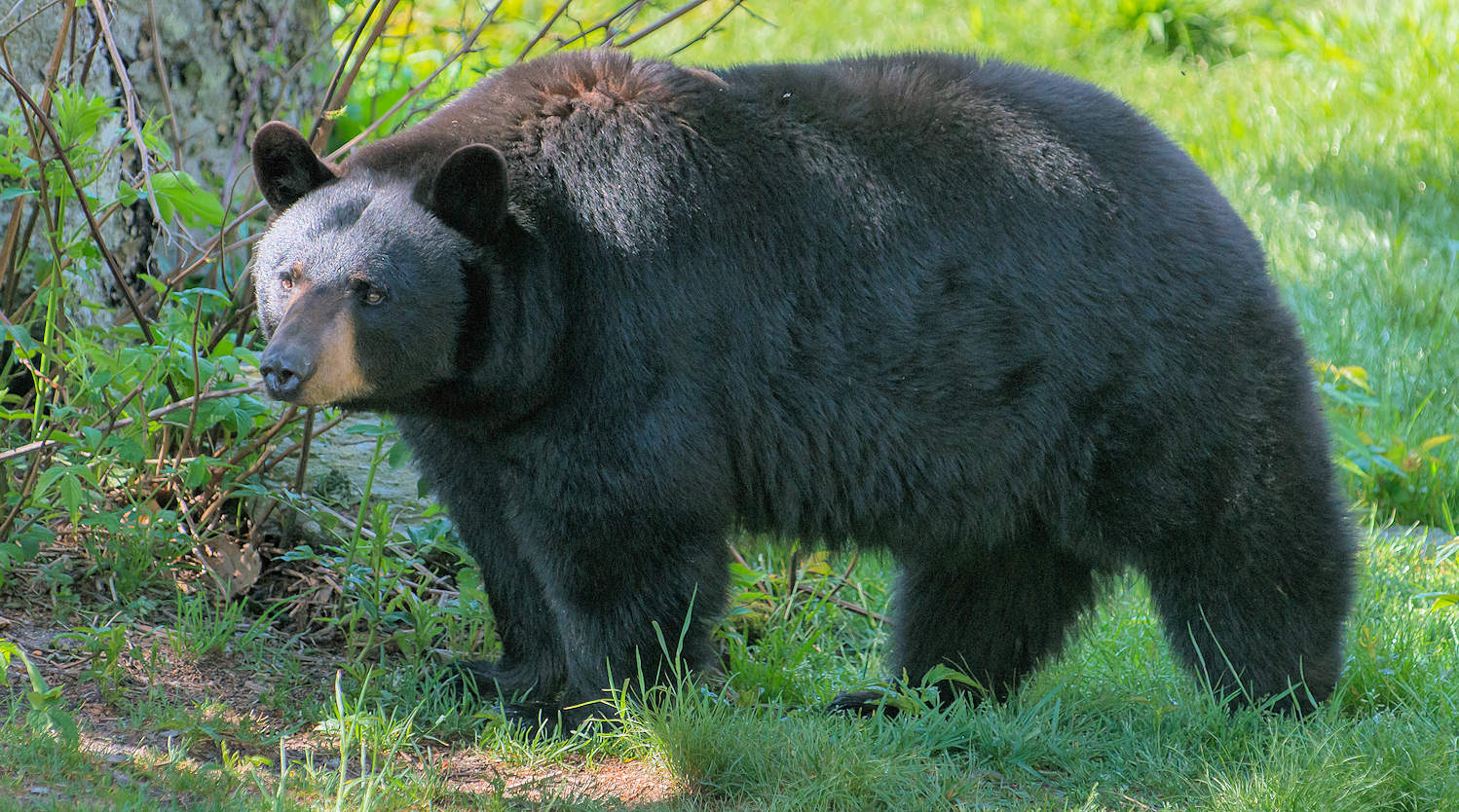 The American Black Bear ranges throughout the forested areas of the United States and Canada. At least three quarters of their diet consists of vegetable matter, especially fruit, berries, nuts, and roots. The diet also includes insects, fish, rodents and carrion. See our bears in the Wildlife Habitats at Grandfather Mountain:

The black bear weighs between 200 and 600 pounds, with females being smaller than males. It measures five to six feet from head to tail and stands three feet at the shoulder. The lumbering walk of the black bear can be deceptive because it can run 35 miles per hour when the need arises. The most common color phases are black, chocolate brown, and cinnamon brown. In the Grandfather Mountain animal habitats, Kodiak the Bear is an example of the rare cinnamon-colored variety.

Like other bears that sleep through the winter, the black bear becomes fat with the approach of cold weather, ceases eating, and goes into a den in a protected location to sleep for the winter. In the southern regions, bears will sometimes venture outside during warmer weather. During hibernation their body temperature drops from 100 degrees to 88-93 degrees. Their heart beat will slow to as few as eight beats per minute, they will breathe once every 45 seconds, and their metabolic rate is cut in half.

Bears are unique in that they can sleep for six to seven months without eating or drinking, sometimes without urinating or defecating, and yet they remain in a healthy state. It is hoped that research into the hibernation of bears will lead to advances in human medicine, particularly in the areas of kidney disease, cholesterol gall stones and hardening of the arteries.

Bears mate during a brief period in June and early July, but the fertilized egg does not implant right away. If the mother bear has stored up enough energy for the winter and is healthy in late autumn, the egg will implant and begin to grow. Cubs are born in January and February while the mothers are in hibernation. Mother bears deliver two to five cubs per litter. They usually give birth every other year, but sometimes wait three to four years between litters. At birth the cubs weigh six to eight ounces and are naked and blind. They are usually weaned at six to eight months but will stay with their mothers until the following spring.

Black bears live about 25 to 30 years in captivity. Their life expectancy in the wild is much shorter, usually three to five years, because they are classified as a game species.

Want a close up look at our bears? Take our “Meet the Bears” behind-the-scenes tour. To learn more about bears, attend an Animal Encounter daily April-October.

Looking for a special gift? Adopt one of our Bears.