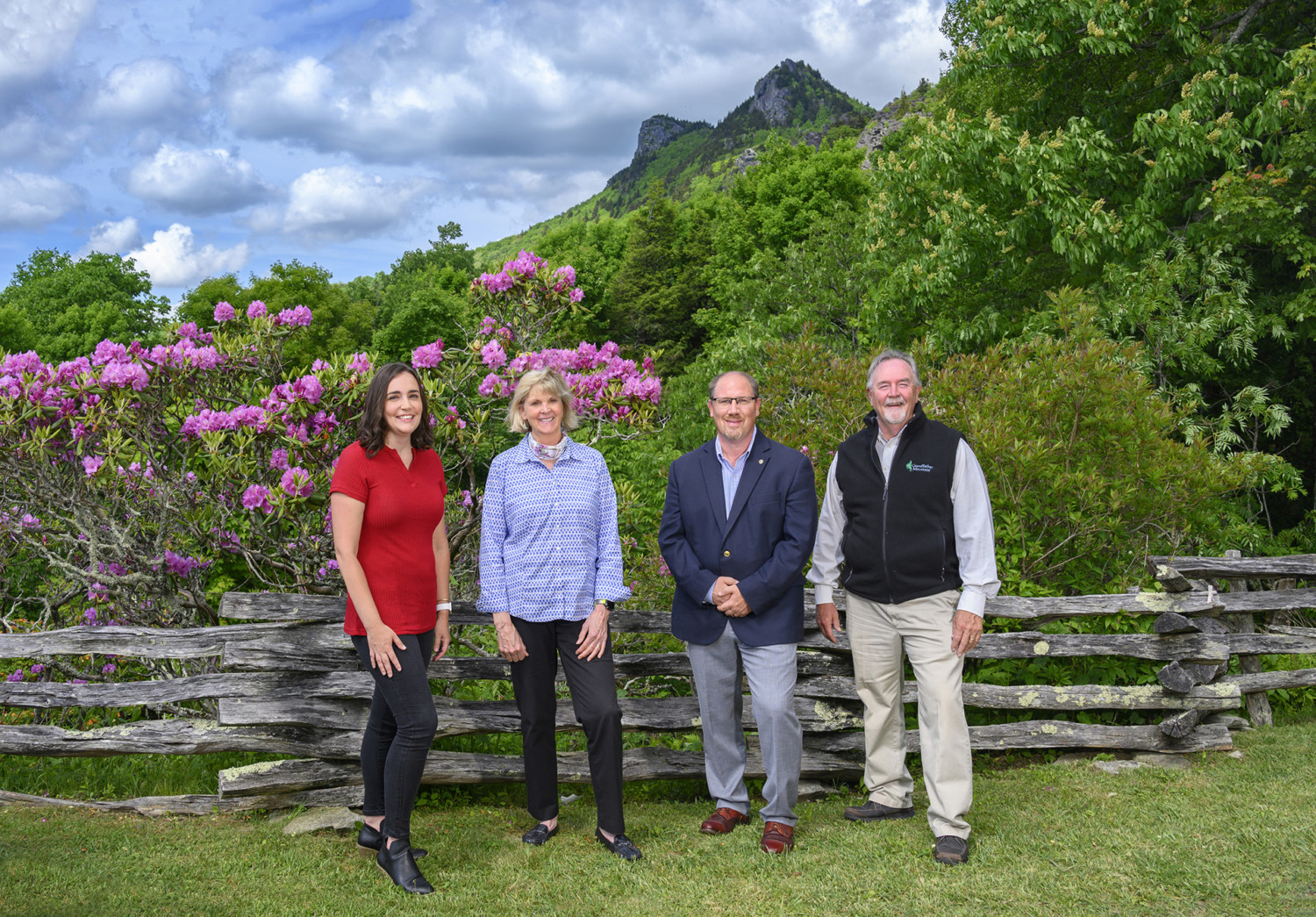 Over the past couple of years, Grandfather Mountain has welcomed a few new, yet familiar, faces to its leadership team to direct the foundation into the future as it prepares to open the new Wilson Center for Nature Discovery in 2022.

“Our mindset is to protect and preserve Grandfather Mountain for future generations,” said Jesse Pope, president and executive director of the Grandfather Mountain Stewardship Foundation, the non-profit organization that owns and operates the Linville, N.C., nature park. “But what we learned in the last few years is that we really have to be adaptive to change, and we have to respond to the world around us. We are transitioning from a preservation mindset to a conservation and future planning mindset, with a more mission-focused approach.”

This approach is centered on the foundation’s central purpose of inspiring conservation of the natural world by helping guests explore, understand and value the wonders of Grandfather Mountain.

Going forward, the new Wilson Center for Nature Discovery will play a major part in helping the foundation accomplish its objective. The Wilson Center, tentatively scheduled to open in June 2022, will feature brand new state-of-the-art museum exhibits, an event and conferencing space, and an outdoor learning environment, in addition to renovations to the gift shop, Mildred’s Grill restaurant and the auditorium.

Landis Taylor, who is the newest member of the GMSF leadership team, will be instrumental in communicating plans for the Wilson Center to the public. As the assistant vice president of marketing and communications, Taylor will be bringing more than 15 years of experience to her new position after previously working at one of the country’s top destination marketing organizations: Explore Asheville. Despite being the newest member on the team, Taylor is a familiar face on the mountain.

She not only started her career at the GMSF after completing a degree in journalism and mass communications at the University of North Carolina at Chapel Hill, but she also met her husband, Gabe, on the mountain, who served as a naturalist and later the chief interpretive ranger.

Taylor worked at the GMSF from 2006 to 2013 and was hired by park founder Hugh Morton’s daughter, Catherine Morton, as a public relations assistant. Soon after Hugh Morton’s passing, Taylor was promoted to news director before assuming the role of director of marketing and communications.

During her tenure, Taylor experienced a time of monumental change, as the park transitioned into a non-profit and she began the attraction’s social media channels, which were brand new technologies at the time.

Looking forward, Taylor said that as she and her husband raise their children and continue to develop their careers, they will be moving mountains together.

“This place feels like home,” she said. “It feels very familiar, and there are still a lot of folks I know here, but it has grown so much in the last eight years. My role moving forward will be strategic planning for these big upcoming projects and moving Grandfather Mountain’s marketing and communications efforts into the future.”

The other most recent tectonic shift on the leadership team came in March 2020, when Lesley Platek was promoted from her position as volunteer coordinator to vice president. Having previously worked as a tennis coach for 35 years, Platek’s ability to inspire and encourage those around her quickly became apparent when she established the park’s volunteer program, earning her the reputation as the “Mother Bear” of the mountain.

Upon being hired in 2014, Platek’s role gradually expanded from recruiting and organizing volunteers to planning events, fundraising, improving the environmental wildlife habitats and providing support during the planning stages of the Wilson Center. All the while, Platek and Pope were creating jobs in the community and expanding the influence that Grandfather Mountain would have on generations to come, making her what Pope called the obvious choice for the foundation’s next vice president, albeit unbeknownst to herself.

“The best compliment I’ve ever had on the mountain was when I was in Jesse’s office after several years with the organization, and he said ‘We’ve been looking for a vice president, and we’ve found the vice president,’” Platek recalled. “I thought that was great news, and then he said, ‘And I’m looking at her right now.’ Then I started crying. It took me by surprise.”

Platek acknowledged that not many organizations would take such a leap of faith on someone who had already completed one career and was looking to begin another. Yet for the GMSF, that bet has already more than paid off, and that fact became apparent just 48 hours after Platek was promoted.

“I got the title, and within 48 hours, COVID hit, and we were in the middle of shutting down,” she said. “That would probably go down as my proudest moment on the mountain, because that’s when the leadership team and the staff really came together. We were getting information about how to proceed with keeping the mountain open and keeping our staff safe.

“The biggest fear for us was that we had staff up there taking invisible bullets for us. All of the sudden, I’m in upper management and losing sleep at the fact that I would be so upset if someone on our staff were to get ill or if their family members were to get ill. We did everything possible to try to keep everyone safe.”

While Platek may be known as the “Mother Bear” of the mountain, operations manager Tommy Oakley is known as the “enforcer” for his ability to put into action the plans that the executives produce. Oakley came to Grandfather Mountain from the South Carolina Department of Employment, where he worked for 20 years.

A self-proclaimed “snow fanatic,” Oakley purchased a weekend getaway home in the High Country in 2010. However, a health scare the following year encouraged him to make a career change and move to Western North Carolina fulltime.

With the Wilson Center coming online next year, Pope said the new facility will be in good hands from an operations perspective, as Oakley handles such duties as logistics, staffing, traffic control and ensuring everyone has the right equipment to succeed.

“Working at Grandfather Mountain now feels like its second nature,” Oakley said. “It’s like being home. I really love what I do here, and I look forward to it every day. I wake up ready to go to work. It’s very family-oriented, and it’s just a great place to work and to live.”

Lastly, a man who has been around Grandfather Mountain for nearly half a century will also be taking on a different role. Harris Prevost has served in a multitude of positions, including operations manager and more recently as vice president. Since 2020, he has taken on the part-time role of community relations director.

Before Prevost became Hugh Morton’s right hand man for the good part of four decades, he worked at a recording studio in Fayetteville, N.C. One night, he came home from work early and saw Morton being interviewed on the news during his campaign for governor of North Carolina. Prevost said that moment completely changed his life and inspired him to drive to Grandfather Mountain to apply for a job. He was able to get his foot in the door with his background in accounting before new opportunities became available.

“A position opened up to be head of marketing and communications, half for Grandfather Mountain and half for Grandfather Mountain Golf and Country Club at the time,” Prevost recalled. “That was in January of 1978. Mr. Morton interviewed me and said I was not what he was looking for. I told him, ‘I like to write, I like people, I know golf, and I can do the job.’ He said he would give me a chance, but I was on probation, which he reminded me of for years thereafter.”

It’s safe to say that Prevost is no longer on probation. Having seen many individuals on the leadership team come and go throughout the years, he gave his thoughts on the current group leading Grandfather Mountain into the future.

“It’s the best we’ve ever had,” Prevost said. “Their technical expertise is really strong. They care deeply about all the employees here, and they engage really well with all employees. We have a really strong family atmosphere.”