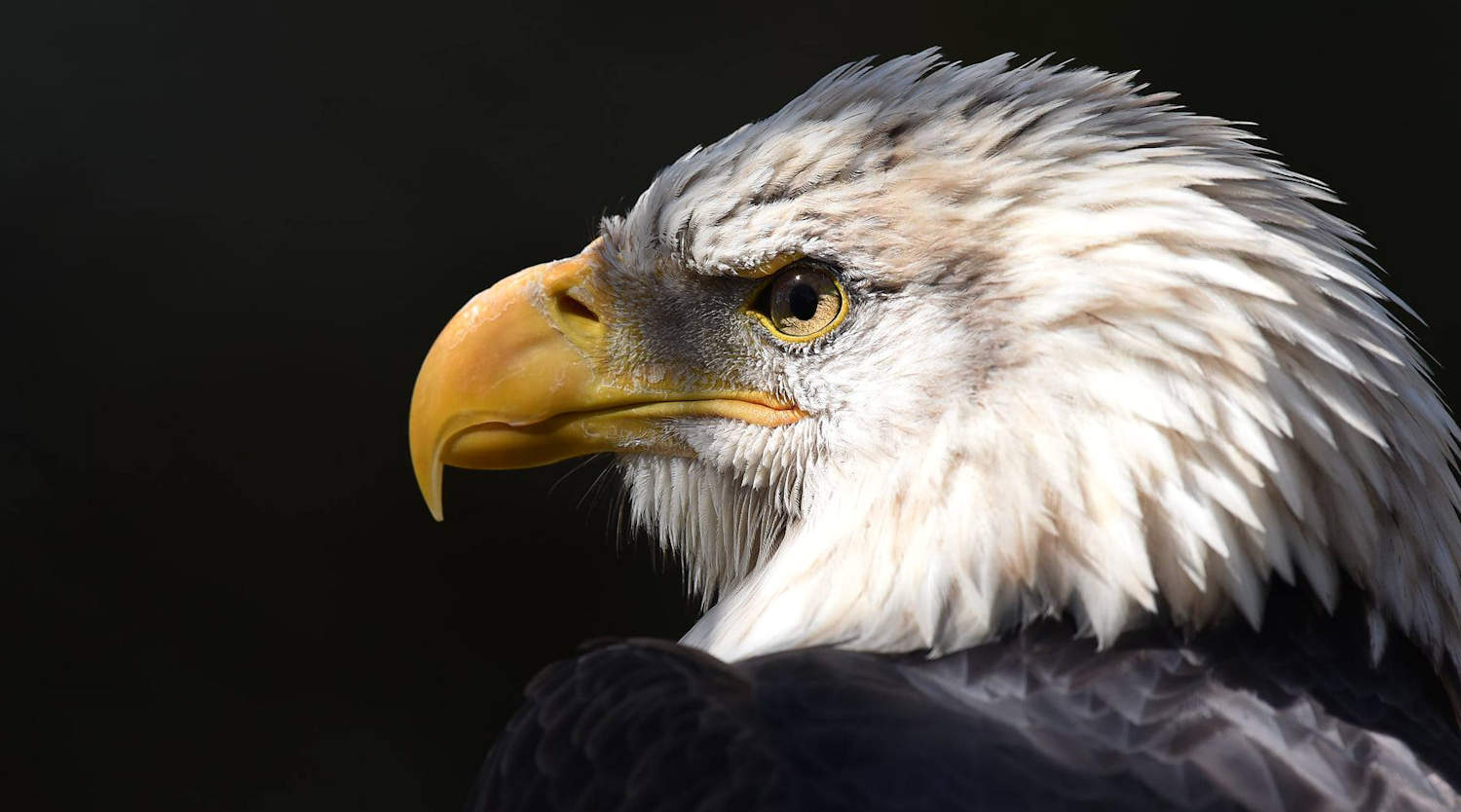 Bald Eagle nests along fresh or salt waters in North America, with more than two thirds of the U.S. population native to Alaska. In the southern parts of the U.S., such as Florida, it is quite at home in cypress swamps and mangroves. See our eagles in the Wildlife Habitats.

Bald Eagles feed mainly on fish, but catch few themselves, preferring to rob from other birds or to pick up dead fish on the shore. In Alaska during the autumn, when salmon swim upstream to spawn and die, bald eagles gather in great numbers to feed on exhausted and dying fish.

“Bald” refers not to the white head, but to the piebald (black and white) adult plumage. The adult Bald Eagle is blackish brown and assumes a snow white head and tail when it reaches maturity in its fourth year. The adult measures two and half to three feet long with a wing span of six to eight feet. The female is usually one third larger than the male.

It is against the law to hunt eagles and certain other birds of prey in the United States, but poachers do shoot and wound a number of birds each year. Wounded eagles found in the wild are nursed back to health at specialized rehabilitation centers. If possible they are returned to the wild, but when the bird has an injury that will permanently inhibit its ability to survive, they must be placed with licensed caretakers such as Grandfather Mountain.

The Bald Eagle can live 47 years in captivity, but usually lives only 25 years in the wild. It has been the national bird of the United States since 1782–symbolizing freedom, power and majesty.

The eagle’s ability to see detail at a distance is extraordinary. Its vision is binocular, which means it is capable of altering focus from two feet to two miles.

The eagle’s skull has a feature called supra-orbital ridges which are bony extensions that overhang the eyes and help protect them from injury when the eagle is catching and handling prey. They also shield the eyes, like sun visors, reducing glare. The eyes are fixed in their sockets, so the eagle has to turn its whole head to look around.

Eagles mate for life and return to the same nest every year. The female lays one to three eggs which hatch in 35 to 40 days. Eggs are usually laid several days apart and the chicks hatch at different times.

The first chick will be fed by the parents for several days before its sibling hatches and will, therefore, have a significant size and weight advantage over the younger chick. In years when the parents are unable to bring sufficient food for both chicks, the older chick bullies the younger and weaker one until it dies of starvation. This behavior ensures that in years when food supplies run short, the older chick, at least, can be raised successfully.

The parents care for the young, with the eaglets eating more than their own weight each day. They learn to fly after about eight weeks and remain with the adults until they learn to hunt.

Looking for a special gift? Adopt one of our Eagles.