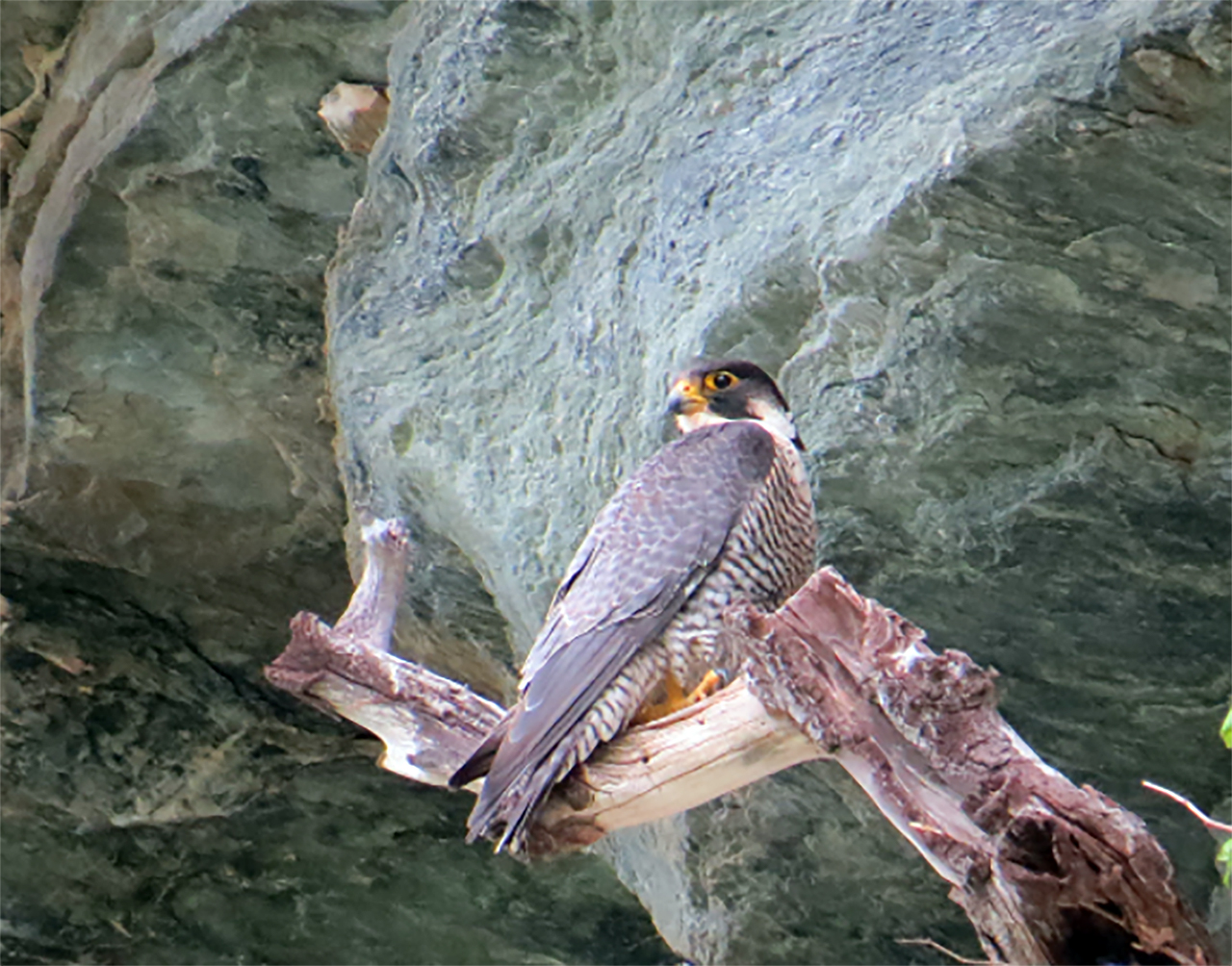 But the nonprofit nature park’s latest conservation efforts soar to even loftier heights.

In conjunction with the N.C. Wildlife Resources Commission, park naturalists have confirmed the successful nesting of two peregrine falcons — the first on Grandfather Mountain since 2008.

Why are a couple of small fledglings such a big deal?

That means North Carolina has only about 15 to 20 breeding pairs of peregrine falcons in state every year.

It also means that successful nesting is that much more crucial. A “successful nest,” Avery explained, is when nestlings reach 35 to 40 days of age and become fledglings, meaning they’ve developed wings large enough for flight.

Seeing this occur at Grandfather Mountain was especially exciting, considering such a nesting hasn’t been documented in the park since 2008, said John Caveny, director of education and natural resources for the Grandfather Mountain Stewardship Foundation, the nonprofit organization that owns and operates the Linville, N.C., nature park.

“I’ve been observing with Clifton for the last four years, and we’ve seen peregrines every time, but never a successful nest before,” Caveny said.

“The peregrines at Grandfather have historically not done very well in terms of nest success,” Avery said. “Since 2008, we very regularly have two birds that seem to be a mated pair and are working toward producing some nestlings, but something seems to throw them off or deter them from year to year.”

Sometimes, he said, one of the peregrines is a sub-adult, or “a young adult not experienced enough to handle the duties of parenthood,” Avery explained.

This year, however, was different.

“Both were in adult plumage, and they actually moved to a different cliff location this year, where, as far as we know, we’ve never documented them nesting before,” Avery said, noting that peregrines thrive in high-cliff habitat and will not nest elsewhere. “Occasionally, we get reports of them in downtown Charlotte or Raleigh … with the skyscrapers acting as artificial cliffs.”

However, Avery explained, they don’t build a literal nest, instead laying their eggs on the rock itself, making a depression in gravel, soil or bark or leaf matter. They’ll even return to the same nesting site, or at least area, year after year.

“So, these falcons at Grandfather Mountain have basically nested on this certain side of the mountain every single year for as long as we’ve been monitoring them,” he said.

North Carolina peregrines have been closely monitored by N.C. Wildlife since 1984, when they were reintroduced to the Eastern United States after nearly going extinct, due primarily to the high usage of pesticides, such as DDT, which found its way into streams and animals in the falcons’ diet.

The NCWRC reintroduced captive raised peregrines into the wild to help re-establish their population in North Carolina throughout the 1990s. Since 1997, the NCWRC reports, the peregrine population has continued to increase.

However, successful nests in North Carolina have been fewer and farther between than one would hope.

“Nest success in North Carolina is significantly lower than the national average,” Avery said. “Our occupancy — a pair of falcons occupying a nest site — is right up there with the national average and isn’t an issue at all. It’s the nest success … that is what us falcon biologists are trying to figure out.”

Avery said there are likely a few factors at play, but the most significant is human disturbance.

Outdoor recreation also plays a part, particularly rock-climbing. However, he praised NCWRC’s relationship with the Carolina Climbers Coalition, which works with the commission to ensure that climbers behave responsibly and adhere to annual cliff closures intended to protect the falcons.

Another contributing factor is more fowl in nature — the great horned owl, which is a natural predator of the peregrine falcon. Avery said numerous surveys were conducted that showed great horned owls to live near cliff sites with unsuccessful nests.

N.C. Wildlife officials continue to keep a close eye on the birds, monitoring cliff sites throughout the state, most of which can be found in Western North Carolina.

“We start observing them in early spring, and we’ll observe into mid-summer,” Avery said. “It ends up being about once every three to four weeks we’re making site visits.”

He typically spends up to four hours at a time at each site, attempting to determine whether the birds are a pair, if they’re adults or sub-adults and where they’re nesting. But observers have to keep their distance and remain hidden.

“They’re very territorial and aggressive,” Avery said. “If they noticed my presence, they would not be happy, and it would increase the risk of them abandoning their nest.”

“One had already fledged, and the other was probably going to fledge in a matter of hours, as well,” Avery added. “So, that was really exciting. And it gives me hope that maybe this pair will attempt to nest there next year, and maybe we’ll string together a couple good years in a row.”

After fledging, the fledglings typically stick around their nest for a month or up to six weeks, Avery explained, learning the ins and outs of being a peregrine falcon.

“And then the parents will kind of kick them off so they can find their own territories,” Caveny said. “So, there will probably be a pretty good chance to potentially see them flying around the Mile High Swinging Bridge.

“Peregrines are still an endangered species in North Carolina, and I think this is something special we can share with our guests to not only inspire conservation of Grandfather Mountain but of the natural world in general.”

The nonprofit Grandfather Mountain Stewardship Foundation strives to inspire conservation of the natural world by helping guests explore, understand and value the wonders of Grandfather Mountain. For more information, call 800-468-7325, or click here to book your visit.