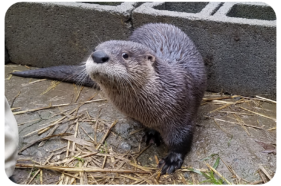 Things are looking up for a certain pup.

The otter pup came to the mountain in November 2017, having been found orphaned in the Asheville area earlier that year. In April, he was brought to a Lincolnton, N.C.-based wildlife rehabilitator, the same who helped rehabilitate four of Grandfather’s other river otters.

Upon arriving in Lincolnton, Uno was estimated to be between six and eight weeks old. At such a young age, river otters don’t yet know how to swim. Their eyes only start opening around five weeks of age.

Uno’s rehabber provided one-on-one swimming lessons, with the intention of releasing him back into the wild.

Uno passed with flying colors. But there was one problem.

“He was just too friendly to be released,” Tipton said, noting that his affection toward humans would prove dangerous in the wild. 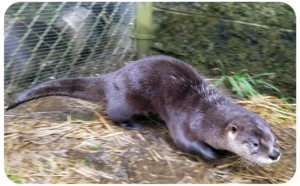 And that’s where Grandfather Mountain came in.

The Linville, N.C., nonprofit nature preserve and attraction is home to a variety of rescued animals, including black bears, bald eagles, mountain lions, elk and river otters, that, having been orphaned or injured in the wild or born into captivity, are unfit to be released into the wild.

At Grandfather, they live in environmental wildlife habitats, specially designed spaces built around actual native landscape with ample room to roam as they please. At the habitats, guests can learn about the important role these animals play in the ecosystem, while seeing them in their natural settings.

The river otter habitat features an underwater viewing area, where guests of all ages can watch the playful creatures swim and frolic in their aquatic element.

Uno, however, currently resides in the mountain’s spacious quarantine facility, known as The Plaza, where he’s being introduced to a couple of Grandfather’s off-display river otters, Nottaway and Nova.

The mountain keeps only two of its five otters in the main habitat at a time, due to conflicting personalities, and would alternate display time between pairs — Luna and Oscar, and Nottaway and Nova.

With Nottaway, Grandfather’s oldest river otter, nearing his 18th birthday and beginning to have some difficulty traversing the habitat, he and Nova (who’s almost 5 years old) spend most of their time among the creature comforts of The Plaza, which include an indoor sleeping and dining space and an outdoor play area, complete with private swimming pools.

The idea is to eventually have Uno and Nova share the main habitat, alternating with Luna and Oscar, while Nottaway enjoys his golden years at The Plaza. As such, Uno is gradually being introduced to the elder otter and his younger cohort.

“They’re already sniffing noses and seeing each other, so he’s comfortable enough with the whole Plaza area,” Tipton said. “We’re giving him a little time to get a little more age on him.”

Because as Uno is often inclined to demonstrate, he’s a very playful pup.

“He’s pretty independent, but once he gets bored with his toys, he’ll start chirping a lot, wanting us to pay attention to him,” assistant habitats curator Emma Noto said. “But he’s super interactive with his toys right now, just loving all the new stuff he’s been getting, so everything is just very exciting for him.”

He’s particularly fond of stashing toys in the corners of The Plaza, “which is funny, because I don’t think any of our other otters have ever done that,” Noto said.

Uno is also a fan of rocks.

“We got him this tiny little children’s chair, and when we came to feed him today, he’d placed all of his little rocks on the chair,” Noto said.

“We’re not sure if he’s figured out how to get to the bottom of his pool yet or if he’s too nervous or just too buoyant — he’s definitely a little chunkster — but he’s pretty dang playful,” Noto said. “I don’t think he’s sleeping much right now.”

Folks can welcome Uno to Grandfather Mountain by purchasing him a treat from the habitats’ Animal Wish List on Amazon.com.

Through the list, donors can choose a gift for their favorite animal, purchase it online and have it delivered straight to Grandfather Mountain for their immediate enjoyment.