THE HIGHLAND GAMES AFTER DARK 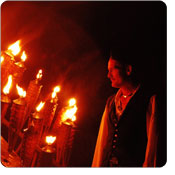 GRANDFATHER MOUNTAIN, N.C. – The Grandfather Mountain Highland Games offer visitors the opportunity to experience the Highlands of Scotland firsthand though traditional music, food and activities. But what some might not realize is that when the sun goes down, the fun is only beginning.

The Highland Games After Dark begins on the evening of Thursday, July 12, with the “Gathering.” Here, the masses flock to MacRae Meadows, enjoying bagpipe music and sheep herding demonstrations while anxiously awaiting twilight and the dramatic opening ceremonies.

As the sun sinks behind Grandfather Mountain’s mile high peaks, the clan leaders convene to announce the presence of their family’s line. Some bang their chest and yell as the enthusiastically primitive ceremony progresses, all in an effort to invoke the “Spirit of the Clans” upon the weekend’s traditional Scottish experience.

Saturday night’s Celtic Rock Concert returns the four headliners: Tuatha Dea, Uncle Hamish and the Hooligans, Saor Patrol and Cutthroat Shamrock. Saor Patrol, a group from the heart of Scotland, plays a unique Tribal Celtic Rock sound that has earned them comparisons to ZZ Top and Motorhead. Uncle Hamish and the Hooligans are a five member Celtic rock band from the mountains of Western North Carolina.

Self-described as “pure primal energy with a Celtic twist,” Tuatha Dea’s eclectic sound blends the tribal vibe of primitive drums with conventional and non conventional instruments such as guitar, bass, modern and Native American flutes as well as a myriad of vocal styles to create a truly unique sound.