A 15-year-old from Tallahassee, Fla., won the third annual Grandfather Mountain Critter Crawl 5K on Saturday, blazing up the Mountain a full 42 seconds ahead of his closest competitor.

Matthew Cashin is the first to approach the finish line of the 2014 Critter Crawl. Photo by Skip Sickler.

Matthew Cashin finished the grueling uphill race in 23:07, followed by Paul Jones of Apex in 23:49 and Matt Campbell of Matthews in 25:40.

The top female finisher was Annette Bednosky of Jefferson in a time of 25:56, good enough for fourth overall. She was followed by Emily Wolfe of Boone in 26:24 and Sarah Jones of Apex in 29:51. All three top female runners surpassed the previous women’s course record of 30:13.

Exactly 70 runners ranging in age from 6 to 63 completed the 2014 Critter Crawl, an annual race hosted by Grandfather Mountain that funds projects for the betterment of the habitat animals, which include black bears, otters, cougars, deer and bald eagles. Proceeds from the 2014 race will go toward otter habitat renovations completed this spring.

“We were really pleased with the race. It being our third year, everything went very smoothly,” said Emma Schlagal, assistant habitats curator for Grandfather Mountain. “It always impresses me the amount of people who come out here and do these events, especially running up a mountain like that.”

Cashin, a high school cross-country and track runner, said he and his father always look for a race to run while visiting his grandparents in Lenoir. With his father sidelined this year, Cashin took on the challenge of the 1,000-foot elevation gain alone.

“It just seemed pretty tough, and I knew I’d have to pace myself all the way up … and just fight through,” he said.

The Critter Crawl begins in MacRae Meadows before starting up the Grandfather Mountain entrance road and looping through the Woods Walk Picnic Area and Animal Habitats. Runners pass by Forrest Gump Curve, where scenes from the 1994 motion picture were filmed, and climb the switchbacks to finish at the Mile High Swinging Bridge.

Cashin said he drove the course beforehand, but everything was different when he experienced it on foot. 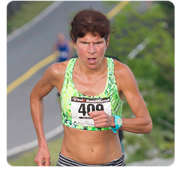 Annette Bednosky, the first woman to cross the finish line, did so in a new women’s course record of 25:56. Photo by Skip Sickler.

For Bednosky, the top female finisher, the switchbacks were familiar. A seasoned ultramarathon runner, Bednosky said she had run The Bear footrace three or four times and previously biked the Bridge to Bridge, a 100-mile ride that used to end at Grandfather Mountain.

Bednosky said she was returning to running after some time away and did the Critter Crawl “for fun.” Her fun run set a new women’s course record.

The top three male and female finishers were presented with commemorative trophies.

Visit http://bit.ly/GMCritterCrawl to view the full results from Right on Time Productions, and visit Facebook.com/GrandfatherMtn to view photos from the race.