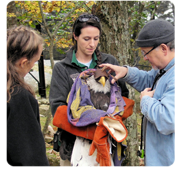 Sitka, a new female bald eagle arrived at Grandfather Mountain Wednesday, October 16, and was introduced to Griffin, the male bald eagle that has been living in the habitat since May 2013.  The eagle came from the Alaska Raptor Center and has been named after the town where the center is located, Sitka.

Sitka had suffered an injury to her right wing before arriving at the Alaska Raptor Center and was deemed unable to survive in the wild.  Before Sitka was released into the habitat at Grandfather Mountain she received a medical check fromLee Bolt, DVM of Sweeten Creek Animal and Bird Hospital in Asheville, N.C, and was found to be very healthy. Sitka’s exact age is not known but darker feathers on her head may indicate that she is around five years old.

Sitka’s introduction to the eagle habitat and to Griffin is going very well.  As expected the raptor is showing some signs of stress and anxiety but overall the habitat staff members and Dr. Bolt couldn’t ask for a better transition.  The two eagles have been observed flying to sit on the same perch with each other. 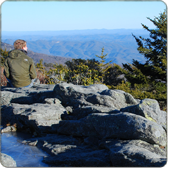 As the last of autumn’s leaves drop from the trees and fall leaf lookers retreat back to warmer climates, winter’s chill sweeps through the High Country and paves the way for a “Secret Season” on the mountain. Grandfather Mountain offers “Secret Season” passes good any time  From November 1 through April 30, to experience the wonder of the mountain during the winter at a very affordable price.

The price of an adult pass is $32, which means the pass holder can visit every day for six months at a price less than the cost of two adult tickets.  An individual pass for a child between the ages of four and twelve years old, is $18 each.  The group pass (good for six people traveling in the same vehicle) sells for $90 and pays for itself on the first visit.

Secret Season passes go on sale November 1 at the Grandfather Mountain entrance gate and are valid until April 30.  Winter hours, weather permitting, are 9 a.m. to 5 p.m.  The park is closed Thanksgiving and Christmas days.

Grandfather Mountain is a magical place when rime ice covers the surrounding peaks. Opening is delayed until all roads and paths can be cleared of snow and ice, but a phone call to the entrance at 828-733-4337 can confirm the day’s conditions and set the stage for a memorable outing for the entire family.

The Woolly Worm has made its prediction and all the weather experts are completing their forecasts for the coming winter; now it’s your turn.  This year marks the 8th Annual Winter Weather Contest for E-Club members.

“Winter” for this contest refers to November 15 through April 15. Those interested are asked to fill out the questionnaire with their winter predictions.

Please note that once again the snowfall measurement used for this winter’s contest will be taken from data gathered at the Entrance Gate.  High winds at the top of the Mountain have affected precipitation data in previous years and the amount recorded at that location is generally less than what the Mountain actually experiences.

Temperature and wind readings continue to come from the top of the Mountain. Grandfather’s previous winter weather data has been included under some questions to provide reference.

A Winter Weather Winner will be named at the end of April and will receive a day pass for six to the Mountain with lunch included at Mildred’s Grill.

All Grandfather Mountain Winter Weather forecasts must be received by Thursday, November 14 at midnight.