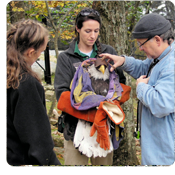 GRANDFATHER MOUNTAIN, N.C. – A new bald eagle arrived at Grandfather Mountain today and was introduced to Griffin, the bald eagle that has been living in the habitat since May 2013.  The eagle came from the Alaska Raptor Center and has been named after the town where the center is located, Sitka.

The sex of the raptor is not currently known.  The sex of a bald eagle is usually determined by the bird’s size but because Sitka is between the typical size of a male and female this has not be determined.  A blood sample was drawn from the bird before it left Alaska and the test results should be announced in the next 10 days.

Sitka had suffered an injury to its right wing before arriving at the Alaska Raptor Center and was deemed unable to survive in the wild.  Before being released into the habitat at Grandfather Mountain; Lee Bolt, DVM of Sweeten Creek Animal and Bird Hospital in Asheville, N.C; performed a medical check on the raptor and said that it looked very healthy.  The age of the bird is not known but darker feathers on its head may indicate that it is around five years old.

Sitka’s introduction to the eagle habitat and to Griffin is going very well.  As expected the raptor is showing some signs of stress and anxiety but overall the habitat staff members and Dr. Bolt couldn’t ask for a better transition.  Staff members have observed both eagles flying to be on the same perch as the other bird.

The animal habitats at Grandfather Mountain were completely closed for an hour when the bird was being released into the habitat.  Limited access to the other habitat animals was available for park guests later in the day.  As eagles are easily stressed and Sitka will be very sensitive to the new sights and sounds of Grandfather Mountain, the habitat access will remain somewhat limited to guests for the next week or two.  While the pathway between the cougar habitat and eagle habitat will remain closed, guests should be able to access each habitat (deer, otter, eagle, black bear and cougar).

The Grandfather Mountain Stewardship Foundation is a not-for-profit corporation established to preserve Grandfather Mountain, operate the nature park in the public interest and participate in educational research activities.  For more information phone 800-468-7325 or plan a trip at www.grandfathermtn-staging.v38mw8dg-liquidwebsites.com.