The Street View of Grandfather Mountain is now available at bit.ly/GMstreetview. 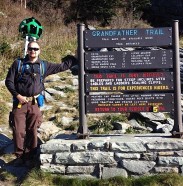 “It’s really cool that people who want to go and physically can’t can still take a virtual hike,” said John Caveny, chief interpretive ranger for Grandfather Mountain Stewardship Foundation. “You can take every step on the trail through the camera.”

In fall 2014, Caveny and a representative of The Conservation Fund borrowed and set out with Trekker, a 4-foot-tall, 40-pound camera and backpack that’s part of Google’s project to create a digital reflection of the world for people to explore and enjoy. The Trekker enables Street View to feature places around the world not accessible by car, bike, trolley or snowmobile.

Caveny said the 0.9-mile hike to MacRae Peak was even more rigorous with the Trekker, which contains 15 lenses shooting photos every 2.5 seconds to capture the scene. Google’s Street View engineering team then stitches together each image to show the trail from every perspective.

“It was tough because the Trekker is 4 feet tall, so it was definitely awkward to have my center of balance up high,” Caveny said. “The trail canopy isn’t that high either, so it was a lot of hiking bent over to avoid brushing up against the trees.”

But the ranger’s pain was the public’s gain, as the Trekker captured incredible 360-degree views of the Blue Ridge Mountains as the first hints of fall color emerged.

“We hope that panoramic, fully navigable imagery of these places on Google Maps enables people to explore and learn about these sites of historic significance and national pride,” said Deanna Yick, Google Maps Street View program manager. “The imagery collected with The Conservation Fund and its natural resource partners truly brings Grandfather Mountain to life.”

These sites, which also include Chimney Rock State Park and DuPont State Recreational Forest in North Carolina, join a cadre of incredible locations ranging from the paths of the Grand Canyon to the pyramids of Egypt to the canals of Venice.

Caveny said the Google Street View images will help prospective visitors get a better sense of the mountain. “This put us on the map as one of the most iconic hikes in North Carolina, so it was a privilege that they wanted to come up and do this with us,” Caveny said.

The not-for-profit Grandfather Mountain Stewardship Foundation strives to inspire conservation of the natural world by helping guests explore, understand and value the wonders of Grandfather Mountain. For more information, call (800) 468-7325 or visit www.grandfathermtn-staging.v38mw8dg-liquidwebsites.com to plan a trip.