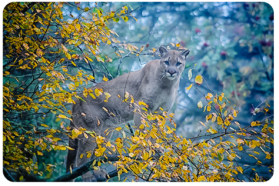 On Monday, March 25, Grandfather Mountain bid farewell to Aspen, a Western cougar and longtime resident of the park’s wildlife habitats.

According to habitat staff, Aspen grew increasingly unresponsive following a weekend tooth-removal surgery, which was also intended to diagnose some other ailments. After his keepers kept him under 24-hour observation, his condition only worsened, and he was humanely euthanized on March 25.

Aspen was 15 years old, two years older than the average lifespan of a Western cougar in the wild.

“Aspen was such a great ambassador of his species and for Grandfather Mountain,” said Jesse Pope, president and executive director of the Grandfather Mountain Stewardship Foundation, the nonprofit organization that owns and operates the Linville, N.C., nature park. “Everyone that met him was in awe of his gentle nature and his interest in meeting those who visited with him.”

Those who met and worked with Aspen knew he was full of surprises, from his gentle purring and his colorful vocalizations to his playful, feisty nature. As it turns out, this was true from the very beginning.

Born June 22, 2003, at Rocky Mountain Wildlife Park in Pagosa Springs, Colo., Aspen and his siblings astonished their keepers, who thought the cubs’ mother was too old to bear kittens.

As a result, the cubs all had to be hand-raised by staff. Grandfather Mountain had recently lost an elderly cougar due to age-related complications, when habitat staff received a call from the Rocky Mountain Wildlife keepers, stating that they had some cubs in need of a home. 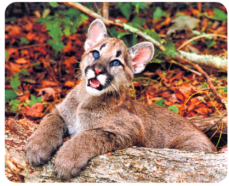 Aspen’s journey to Grandfather Mountain started in a twin-engine airplane on Oct. 3, 2003, when he was only three months old. The plane came courtesy of friends from Luray Caverns in Luray, Va., a member of the Southern Highland Attractions organization, of which Grandfather Mountain is also a member.

“Upon first sight, Aspen immediately began stealing the hearts of everyone he came in contact with, which he continued to do every day for the rest of his life,” said Christie Tipton, Grandfather’s chief habitats curator.

Since Aspen was so small upon his arrival in the Western North Carolina High Country, he could not safely reside with his adult cougar counterparts in the main habitat.

“Aspen instead lived in a special outdoor holding area near the habitat office, made specifically for him, and on multiple occasions also played the role of our ‘big’ office cat,” Tipton recalled. “We definitely didn’t have problems with mice during that time. Our actual resident office cats were not particularly thrilled with that arrangement.”

Aspen spent his cub-hood days playing with toys, pouncing on keepers, chasing the cats, nursing on blankets and fleeces and licking his keepers’ heads — especially Pope’s, who served as a habitat keeper at the time.

Fun as it was, such personal interaction is integral to instilling and developing trust between young animals and their keepers, Pope said.

“I was fortunate to work with Aspen when he first came to Grandfather Mountain,” he said. “Helping care for him was one of the highlights of my career on the mountain. I really don’t remember a day on Grandfather when Aspen wasn’t some part of it.”

Once Aspen was introduced to his new feline family, Sheaba and Nikita, the keepers took a figurative step back and ceased close physical interaction for both theirs and the cats’ safety — a practice done with most animals brought to the mountain at a young age.

Grandfather Mountain’s resident animals live in environmental wildlife habitats, most of which are built around native environment, offering the animals acres of room to roam as they please, even out of sight if they desire some privacy; or, in the cougars’ case, some alone time to lounge in the sun.

“Aspen became fast friends with his cougar family — particularly Nikita — and they could often be seeing playing chase games, snuggling and grooming with each other,” Tipton said. 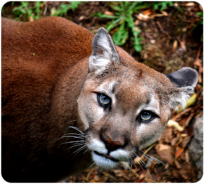 Those who met him were always charmed by his striking blue eyes, which most cougar cubs exhibit at a young age but lose in adulthood. Aspen, however, retained them, along with a special fondness for his keepers, as well as other visitors. This became even more evident after Sheaba and eventually Nikita passed away.

“No matter where he was in the habitat, as soon as he saw his keeper friends at the overlook or on the other side of the fence, he would light up and start calling to them immediately,” Tipton said. “He loved purring and ‘talking’ to his keepers every morning, and he loved meeting (most) new people, making new friends and playing chase games with the smallest of them. He won the countless hearts of every person who has met him over the years.”

Aspen is survived by Logan and Trinity, a sibling pair of Western cougars found orphaned as cubs in Idaho, which Grandfather Mountain rescued in 2016 with the generous support of Bob and Susan Wilson.

“Our keeper staff did an extraordinary job caring for Aspen throughout his life, but their love and affection was never more apparent than in his final days,” Pope said. “He was given the very best care any animal could hope for, and for that, I’m very grateful to Christie Tipton and her highly skilled staff.”