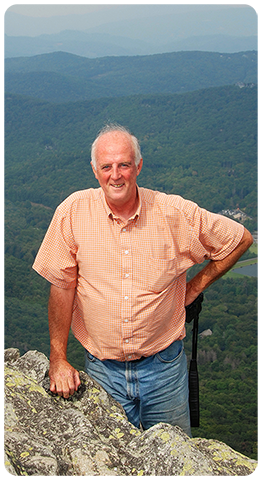 On April 1, 2017, Grandfather Mountain lost one of its most devoted champions.

James McKay Morton, chairman of the Grandfather Mountain Stewardship Foundation board of directors, conservationist, trailblazer, photographer and visionary, passed away at the age of 65.

Morton leaves behind a mountain-sized legacy, having helped establish the nonprofit foundation to preserve Grandfather Mountain for the generations to come. His dedication and devotion to the mountain were akin to those of his father, the late Hugh Morton, who established the Linville, N.C., park as one of North Carolina’s leading travel attractions in 1952.

When Hugh Morton died in 2006, he’d left most of the mountain forever safeguarded from development, with more than 4,000 acres under protection by The Nature Conservancy. In order to further those efforts, Jim Morton went above and beyond — a mile high, to be exact.

“We’d wanted to make sure the property would be permanently protected under an easement, but somebody had to sit down and work out the details,” said Catherine Morton, sister and board member.

Those details included provisions under which Grandfather placed limits on its own growth, preventing any further development above the park’s Nature Museum and environmental wildlife habitats, thus preserving the pristine nature of the park’s higher elevations.

“I told him, “Jim, nobody’s ever going to take a generator up to Calloway Peak to set up a beacon,’ and he said, ‘Catherine, you don’t know what technology is going to be like a decade from now.’”

“Like his father, he was always thinking,” said Harris Prevost, the foundation’s vice president of operations. “Hugh Morton was always about two steps ahead of everybody else, looking into the future, and Jim was the same way.”

According to GMSF executive director Jesse Pope, Jim Morton always saw the forest for the trees.

Throughout the years, Morton worked a spectrum of positions at Grandfather Mountain, including in the wildlife habitats, selling tickets at the entrance and even overseeing operations as general manager. But he was also a trailblazer.

“He built the Profile Trail,” Pope said, referring to Grandfather Mountain’s iconic and most-hiked trail. “Jim designed that entire 3.1-mile trail, and its construction was one thing of which he was very proud.”

“It was his amazing creativity,” Catherine Morton said. “Using only a come-along, a crowbar and his ability to visualize, Jim made a walk through the woods even more beautiful by arranging stones into a lovely staircase up the slope … and maneuvering massive boulders into stepping stones across the Watauga River.”

For part of the construction in 1986, Jim Morton brought along a special friend — Americana music legend Doc Watson. Having been very close with Watson’s son, Merle, who passed away tragically the year before, Morton dedicated a stream crossing to his late friend, dubbing it Merle’s Milestones.

His relationship with the Watson family would extend to MerleFest, the perennially popular music festival in Wilkesboro, N.C., where he would serve as an unofficial photographer.

It was another festival, however, that would grow into one of Morton’s most widely celebrated ideas — Banner Elk’s famed Woolly Worm Festival.

Now entering its 40th year, the festival, like its diminutive mascot, started small. According to mountain folklore, the number of brown and black bands on a woolly worm can predict the severity of an upcoming winter.

“A gentleman who worked at Grandfather Mountain told me about woolly worms being used to forecast the winter,” Morton said in an interview with the Watauga Democrat. “When I finally found a woolly worm, it was completely brown from end to end. I come home from (a) meeting, and right there on my porch was another woolly worm with a lot of black on it, and only a minimal amount of brown.”

Which worm could be trusted?

“I was immediately struck by the need to have a process for selecting which woolly worm to believe,” Morton said in the interview. “We also needed an annual event for Banner Elk. The two problems solved each other.”

At the Woolly Worm Festival, contestants “race” their worms in a series of heats, and the winning worm’s banding serves as the “official” winter forecast.

The first year saw 63 contestants. Now, the festival draws a crowd of approximately 20,000, including some 1,000 contestants and national media coverage.

“He really never ceased to amaze me with his creativity,” Prevost said. “I think he marched to the beat of a different drummer. He was his own man, and in a world of sameness, that was refreshing. He was extremely creative, brilliant and has brought untold good to the community and will continue to do so for years to come.”

In lieu of flowers, the Morton family is requesting donations to the Grandfather Mountain Stewardship Foundation.