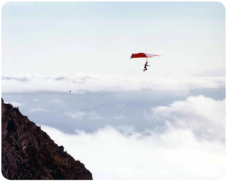 When visiting Grandfather Mountain and crossing the world-famous Mile High Swinging Bridge, many guests feel as though they’re soaring above the clouds.

From 1974 through 1987, Grandfather Mountain was a popular hang gliding destination, playing host to the annual Masters of Hang Gliding Championship and countless exhibition flights.

The mountain even had its own hang gliding team in the Grandfather Mountain Flyers, which would fly daily, weather permitting.

Although the sport is no longer permitted on Grandfather Mountain, the memories continue to fly high, and a number of hang gliding veterans will return Saturday, July 21, for a special reunion and celebration.

Although portions of the event will be limited to participants only, the public is welcome to attend and enjoy a number of gliding-related activities. Park guests will be able to see classic hang gliders on display, as well as participate in a hang gliding simulator in the exhibit area on the second floor of the Top Shop.

Guests are also welcome to attend the following presentations in the Nature Museum Auditorium:

The group is also dedicating a boulder at the park’s Cliffside Overlook, where Harris first launched, through the foundation’s Boulder Club program, in which friends of the mountain can donate to “adopt” a boulder for perpetuity.

The dedication will serve to commemorate the hang gliding veterans, as well as the special occasion of Harris’s first launch on July 13, 1974 — 44 years ago. At the time, Harris had already developed a passion for flying and thought Grandfather Mountain would make an ideal launch site.

He approached Grandfather Mountain founder Hugh Morton, who embraced the idea and arranged for that historic first flight.

“It was terrifying and fun at the same time,” Harris said of the experience. “I measured everything out — the height of the mountain, where the landing areas were, and I knew I could fly from the peak to those landing areas, so I knew it was all possible. But there’s always that element of the unknown, when you haven’t done something before. So, it was terrifying taking off from the boulder at Cliffside, but once I was in the air, I knew everything was as I had expected, and from that point on, it was fun.”

The landing, though, proved a little harrowing.

“It was beautiful,” Harris recounted. “And on the first flight, I wound up landing on one of the greens (at nearby Grandfather Golf & Country Club). There were three golfers on the green, and they couldn’t hear me, of course, even though I was right overhead. So, I yelled down to warn them that I was coming in for a landing. They looked up in disbelief, and I landed right in front of them on the green. They kept asking me where I came from, and I said I came from that peak right up there. I don’t think they believed me. It was pretty funny to see the looks on their faces when they looked up.”

Following the success of his first flight, Harris returned to the mountain that same day to launch from an even greater height — Morton Peak, just across from Linville Peak.

“Well, the wind had picked up a little bit, so I was thinking, ‘Oh, boy, I wonder if I can soar the cliff there. It was intimidating, because it was 400 feet straight down to the trees below, with that granite face. The reason I had picked Cliffside to launch initially was because it only had about 50 feet to fall to the trees, so if I really messed up or it didn’t work, I’d survive.

“So, I took off and turned down the face of the cliff, and I maintained altitude pretty well, and there was lift, but I was having so much fun that I kind of lost track of where I was and waited a little too late to turn in for my landing. I did not make the same green I did before and landed in the tops of some trees and had to get some help down.”

From there, interest in Grandfather as a hang gliding destination took off. The mountain began hosting the Masters of Hang Gliding Championship, the first of which was held in 1976.

The competition ran for 10 years, until tragedy struck when expert pilot Stewart Smith perished in a glider crash. Witnesses believe the wind shifted on Stewart at the last possible minute, leaving him no time to make the proper adjustment. Exhibition flights ended the next year, as well.

Hang gliding, however, continues to be popular in the Western North Carolina High Country, with such events as the annual Tater Hill Open on Tater Hill near Boone carrying on the sport’s storied legacy in the region. In fact, Harris and company plan to a do a bit of flying themselves from the spot.

However, Grandfather Mountain will always represent their zenith.

“The pilot community loves Grandfather Mountain and so appreciates what the Morton family did for all the pilots and the sport of hang gliding,” Harris said.