As the Games celebrate their sixth decade, they hearken back to the rich cultural traditions of Scotland in a setting not so different from the mountains and glens 3,600 miles away.

But organizers are also taking the opportunity to innovate, adding new features for this milestone year. 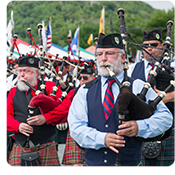 New in 2015 is the Scottish Cultural Village, where experts will discuss or demonstrate numerous aspects of Scottish culture, including blacksmithing, weaving, spinning, athletics, piping and drumming, dancing and more. The experts will present every 30 minutes throughout the weekend in Grove 3.

The Highland Games also features whisky and beer tastings and education in 2015. Experts from Glenmorangie and Ardbeg, two premier single malt distillers, will conduct tastings, consult on fine whisky and educate visitors on the quintessential Scottish drink at their tent in MacRae Meadows. Highland Brewing Company also will have a booth on the field to serve their Scottish-inspired brews in 16-ounce cups or commemorative glasses.

The event begins Thursday afternoon, July 9, with border collie sheepherding demonstrations, Celtic entertainment, the running of “The Bear” and the opening ceremonies.

“The Bear” pits roughly 700 runners against the steep switchbacks of Grandfather Mountain in a five-mile run that climbs 1,568 feet from the town of Linville to the mountain summit. It’s followed Saturday by another test of extreme endurance as the Grandfather Mountain Marathon winds from Appalachian State University in Boone to the site of the Games in Linville.

But the Games truly get under way at the torchlight ceremony on Thursday evening, where representatives of more than 100 clans announce their families’ participation in the gathering. The “raising of the clans” proclaims that they have once again convened to celebrate their heritage.

Guests often bring dinner or purchase concessions at the field to enjoy a picnic at the opening ceremonies. 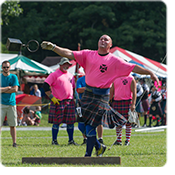 The nation’s top Scottish athletes clash Saturday in traditional heavyweight events such as “Turning the Caber” and “Tossing the Sheaf.” In the caber toss, athletes flip a telephone pole-sized log end over end. The sheaf toss challenges athletes to loft a 16-pound sack of hay over a bar more than 20 feet high. Other ancient tests of strength await the brawny professionals, including highland wrestling, the hammer throw and various weight throws.

Musical guests in 2015 include John Doyle, Jack Devereux, Chambless and Muse, Ed Miller, The Freestylers of Piping, John Taylor, Piper Jones, the Chelsea House Orchestra, Marybeth McQueen and the Brothers MacLeod. Many of the groups also perform during the daylight hours in the Grandfather Mountain Highland Games’ Celtic Groves.

Throughout the weekend, visitors can learn about their own Scottish history and genealogy at clan tents or browse the open-air market for Gaelic and tartan gift items and a variety of concessions, including traditional Scottish meat pies. 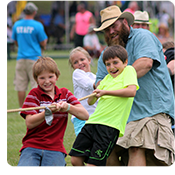 In addition to the flurry of activity at the Meadows, a Scottish Country Dance Gala is planned for Friday night at nearby Lees-McRae College to highlight the traditional ballroom dance style.

Whether you’re new to the Games or a return visitor, the Grandfather Mountain Highland Games offer a hearty “céad míle fáilte” — a hundred thousand welcomes!

Adult admission to the Grandfather Mountain Highland Games is $15 Thursday, $20 Friday, $30 Saturday and $15 Sunday. Tickets cover all activities in the meadows, which on Friday and Saturday last from early morning to midnight. Tickets are $5 each day for children ages 5-12, and children younger than 5 enter free.

Tickets purchased at the entrance must be paid in cash.

Four-day passes are also available online at www.gmhg.org. Adult passes are $75 (including shuttle), and children’s passes are $20.

Shuttle service is provided for a fee between MacRae Meadows and satellite parking areas in Linville, Newland and Boone. Shuttle fees vary depending on the distance between the lots and MacRae Meadows. Buses do not run in the evenings.

For more information about the Games, visit www.gmhg.org or call (828) 733-1333. For lodging and travel information, contact the High Country Host visitor center at (800)438-7500 or highcountryhost.com.