Grandfather Mountain is more than a mile high, but plans for a new “Conservation Campus” will take the park’s educational mission above and beyond.

In fall 2019, the mountain will break ground on an ambitious project to help guests better explore, understand and value the wonders of Grandfather Mountain.

“We’re working to share the wonders of Grandfather in ways that are broader and deeper than ever before,” said Jesse Pope, president and executive director of the Grandfather Mountain Stewardship Foundation, the nonprofit organization that owns and operates the Linville, N.C. nature park.

The mountain hopes to accomplish this through the establishment of the Conservation Campus, a venue to “study nature where nature reigns,” Pope said.

The addition will nearly double the size of the park’s current Nature Museum — and beyond. 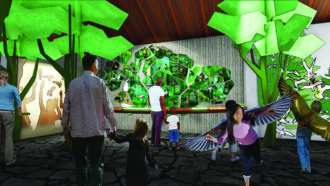 “Whether it’s schoolchildren coming for a field trip or conservation experts visiting together to share new knowledge, guests will gain an even greater appreciation of nature and become even more passionate about protecting and preserving it,” Pope said.

The Nature Museum’s expansion will also include a dozen all-new, interactive exhibits. 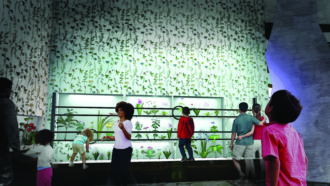 Designed by PGAV Destinations, a recognized leader in the design of museums, zoos, aquariums, resorts and brand destinations, these exhibits will focus on the biodiversity and preservation of the high-elevation forests of the Southern Appalachian region.

“Throughout the exhibits, we will share the stories of the threats to the environment, the positive impact of conservation efforts and the steps that individuals can take to be a force for nature as stewards of the natural world,” Pope said.

The total cost of the project comes to $5.5 million, of which $4.3 million has already been raised during the quiet phase of what the stewardship foundation is calling the Fulfilling Promises Campaign. 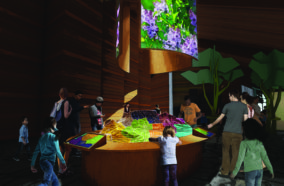 “We are so excited to see the direction our organization is heading in the future,” Pope said. “We have been very encouraged by the overwhelming support we have already received from so many members of our community, including our staff. We can’t thank them enough, but as generous as our friends have been so far, we still need help from the community to make this dream a reality.”

The park itself was the dream of the late Hugh Morton and the Morton family, who owned and operated the Grandfather Mountain attraction and nature preserve for decades, up until its establishment as a nonprofit organization in 2009.

“Today, it’s everyone’s park,” Pope said. “As a nonprofit public charity, everyone who visits Grandfather Mountain and purchases a ticket helps fund our future. The same is true with our donors who support the mountain.”

Thanks to the support received from admission and in-park revenue, such as food, beverage and souvenir sales, 100 percent of any tax-deductible donation made to the Fulfilling Promises campaign will go entirely toward the creation of the Conservation Campus.

“I want to make sure everyone has an opportunity to contribute to Grandfather Mountain’s future, no matter how large or small the donation,” Pope said. “Every dollar will put this dream one step closer to reality.”

Those interested may contribute online at www.grandfather.com/fulfillingpromises or in person by participating in Grandfather’s round-up program, wherein any purchase made at the park’s retail stations (including the restaurant, gift shops, fudge shop and gatehouse) can be rounded up to the next dollar to benefit the campaign.

“Even a small donation can leave a legacy as big as all outdoors,” Pope said.

To learn more about the Fulfilling Promises Campaign, visit www.grandfather.com/fulfillingpromises, or contact Pope at 828-733-2013 or jesse@grandfather.com.