Winter finally arrived at Grandfather Mountain in February, bringing with it five new daily temperature records, the first substantial snow of the season and winds close to 100 mph.

A frigid spell in the third week of the month set the following daily temperature records on the mountain: 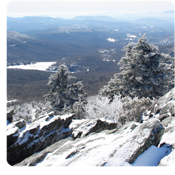 “Winter certainly took its time getting here, but it came full force once it arrived,” said Public Relations Specialist Kellen Short. “It was especially neat to break several daily temperature records that have been standing since the 1950s and ’60s. Depending on who you ask, that’s either very exciting or very distressing.”

Wind speeds also climbed substantially this month, creating wind chills as low as -50° and below. The highest speed recorded for the month at the Mile High Swinging Bridge was 97.6 mph on Feb. 14, and the automated weather equipment also charted several other days in the 70-80 mph range.

The silver lining to the bitter cold was the arrival of snow — more than 16 inches at the base of the mountain.

While snowfall was plentiful in February, it was largely absent from other months this winter.

“While we don’t yet know what March will hold, this has the makings of being one of the least-snowy winters in recorded history on Grandfather Mountain,” Short said.

BEE COLONY TO BE INSTALLED AT GRANDFATHER MOUNTAIN
March 2015