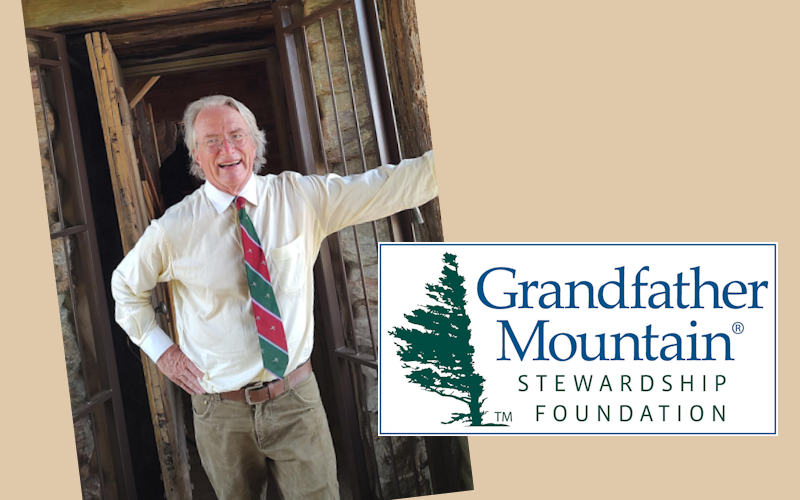 As part of our 2022 Grandfather Presents speaker series, Mike Leonard, who serves on the Board of Directors for the Grandfather Mountain Stewardship Foundation, will share “Stories from the Conservation Deal Maker for Grandfather Mountain… and another 150,000 Mountain Acres.” You are sure to enjoy his entertaining back-stories on key land conservation deals at and around the Blue Ridge Mountains of North Carolina.

Mike is a ninth generation North Carolinian and received his undergrad and law degrees from UNC-Chapel Hill. When he practiced law he was named as one of the “Best Lawyers in America” in Mass Tort Litigation. He is one of the South’s leaders in protecting land for trails, parks, forests and historic sites. Mike served as Chair of the Board of The Conservation Fund from 2014-2019 and has provided valuable assistance to a number of non-profits and government agencies in protecting more than a quarter million acres in the southeast. In 2010, Mike received the North Carolina Award for Public Service, the highest civilian honor given by the State of North Carolina. The late Hugh Morton received the same award in 1983.

In western North Carolina, Mike Leonard played lead roles in negotiating and locating funds for the transactions that led to Chimney Rock and Grandfather Mountain becoming part of the North Carolina State Parks system and transactions that have more than doubled the size of Mount Mitchell State Park since 2016. Mike also assisted in protecting the Mast General Store in Valle Crucis with a historic preservation easement held by the State and in locating funds to protect numerous tracts along the Blue Ridge Parkway, including the Orchard at Altapass, over 3,000 acres at 6,200 foot-high Waterrock Knob near Sylva and over 2,000 acres at Fisher Peak on the North Carolina side of the Virginia state line. Mike was a partner at Womble Carlyle Sandridge & Rice in Winston Salem, N.C. before retiring from the practice of law at the end of 2020. He now works as Senior Real Estate Associate for The Conservation Fund from his office in the historic town of Bethania, N.C.

Arrive early or stay after to chat with the speaker. Read more about Grandfather Presents.

Tickets are not available as this event has passed.