BEE COLONY TO BE INSTALLED AT GRANDFATHER MOUNTAIN

An ambitious group of High Country students is setting up a honeybee colony at Grandfather Mountain in an effort to educate thousands about the pollinator’s plight.

But a recent reduction in grant funding for the project means the group needs additional support to fuel the project’s long-term success. 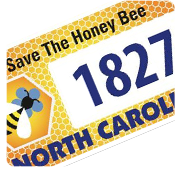 They’re building buzz for the honeybee habitat with the creation of a specialty North Carolina license plate featuring a honeycomb background, bee image and the words “Save the Honeybee.”

The group needs at least 500 commitments to purchase the tag before April 1 for the state legislature to consider the specialty plate. For each plate purchased, $10 would go toward the N.C. Division of Motor Vehicles, and the remaining $5 would be split between bee research efforts at N.C. State University and the Bee Aware project at Grandfather Mountain.

In 2014, students Claudia Button, Nathan Button, Kate Fitzpatrick and Maria Melissaris devised a plan to draw attention to the important honeybees, whose pollination is critical to food production. They wanted to highlight how the insecticides, herbicides and fungicides used each year by homeowners disrupt the bees’ lives and have contributed to a dramatic decline in bee populations worldwide.

The Bee Aware Science Team was chosen in May 2014 as finalists in the Christopher Columbus Awards program and flew to Orlando, Fla., to compete against seven other teams. They won the competition and a whopping $25,000 grant to bring their ideas to life. 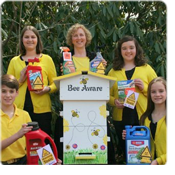 To date, they’ve given presentations to 1,200 school children at five schools about the importance of the honeybee and threats to its survival, as well as sent materials home to parents about the effects of chemicals on bees. They also have addressed garden clubs, library groups and Christmas tree growers about how they can reduce or eliminate their negative impact on bees.

“One kid said, ‘I thought bees just made honey,'” team member Nathan Button said. “He asked more questions about the bee hive and wanted to go home and tell his family how important the bees were.”

But in January, Congress terminated funding for the Christopher Columbus Fellowship Foundation and their STEM (science, technology, engineering and math) programs, leaving the Bee Aware project only half-funded.

Now facing a shortfall, the kids need the support of North Carolina motorists to purchase the specialty license plates in order to complete the project as they originally envisioned.

“When we heard that government cutbacks were going to keep us from getting the second half of our grant, we were worried that we wouldn’t be able to provide the necessary funds for the ongoing yearly expenses of the bee haven,” said team member Kate Fitzpatrick. “That’s when we decided as a team to put all our efforts into getting our plate passed.”

The team has enough funding to install the hives, supply the bees and plant chemical-free flowers and plants for the bees to forage this spring on Grandfather Mountain. They’ll also install an electric fence to keep hungry bears from raiding the hives. The group also plans to create signs and supply a brochure to Grandfather Mountain’s guests to inform them about the importance of bees and how humans can help.

“Grandfather Mountain is excited to host the bee sanctuary for the Bee Aware team — it’s a perfect fit for us,” said Jesse Pope, director of education and natural resources. “Installing the hives at Grandfather Mountain ensures that the team’s message will be received by nearly a quarter-million people annually, including about 10,000 students who visit each year on field trips.”

What the team lacks is funding for a beekeeper to manage the hives long-term, money to replace flowers as they need replanting and help with ongoing expenses of keeping the colony abuzz. Funding from the specialty license plate will help fill this gap, the team hopes.

“We have enough to do our beehive project, it’s just that we were going to do much more than just that,” Coach Jenny Fitzpatrick said.

To learn more about the project or purchase a specialty Save the Honeybees license plate, visit www.beeawarenc.org. Plates must be ordered before April 1.