A group of High Country students was among just 36 teams from across the nation to exhibit their enterprising honeybee project Monday at the White House Science Fair. 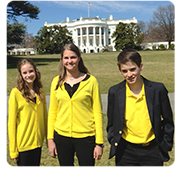 The Bee Aware NC team, composed of home-schooled students from the High Country, rubbed elbows with dignitaries and posed for a photo with President Barack Obama as they showed off their project designed to raise awareness of honeybees’ plight.

The students will oversee the installation of a bee haven this spring at Grandfather Mountain and are sharing information with thousands of students, community members and visitors about the critical importance of pollinators and ongoing threats to their survival.

The team learned only last week that it would be part of the exclusive group invited to Washington, D.C., for the fifth annual science fair. At the event Monday, they addressed reporters, talked about their project with key government officials and stood present as Obama announced more than $240 million in new private-sector commitments to inspire youth to excel in the science, technology, engineering and math fields.

“It was awesome,” said 15-year-old Kate Fitzpatrick, one of three team members who traveled to Washington, D.C., for the event. “I think we got to spread awareness to a lot of kind of ‘higher-up’ people there.”

While the team did not get to meet personally with the president, they did receive a stamp of approval from one of the “First Dogs,” who snatched a stuffed honeybee from the team’s display and took off, flanked by security.

The team also got to tour the White House’s pollinator garden and speak with the chief gardener and the head pastry chef, who uses honey produced in the garden’s hive in meals and as gifts.

“They had the same considerations, so it was interesting to the kids to hear how they chose the location for the hive,” Fitzpatrick said.

On Tuesday, the group met with Rep. Virginia Foxx, toured the U.S. Capitol and observed a vote in the Senate.

The White House invitation was the latest in a series of accolades for the Bee Aware NC group, which earned a $25,000 grant from the Christopher Columbus Fellowship Foundation last year to bring their project to life.

The group also is raising money and awareness through a specialty North Carolina Save the Honeybees license plate. The group still needs about 120 commitments to purchase the tag before April 1 for the state legislature to consider the specialty plate. For each $15 plate purchased, $10 would go toward the N.C. Division of Motor Vehicles, and the remaining $5 would be split between bee research efforts at N.C. State University and the Bee Aware project at Grandfather Mountain.

More information about the project and how to purchase a plate is available at www.beeawarenc.org.

Team member Claudia Button, 13, said they enjoyed being able to share their story again on a national stage.

“It was so exciting being able to be there, and we really enjoyed it all,” Button said. “We spread a lot of awareness about bee decline.”