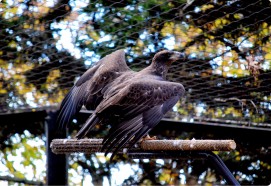 Something eyrie is happening at Grandfather Mountain.

In late August, the mountain welcomed a juvenile bald eagle to its animal habitats.

Named Ajax, the nearly 2-year-old bird of prey spent a month acclimating to his new surroundings and is now on full display in the mountain’s eagle habitat.

Like his “roommate,” Griffin, Ajax had sustained injuries in the wild, preventing him from being released there after rehabilitation.

As a fledgling in Florida, Ajax fell out of his nest, suffering fractures on his left wing, left leg and right shoulder. He was brought to the Busch Gardens Animal Care Center in Tampa, where his wounds were treated and mended.

“Unfortunately, due to those fractures, he wasn’t able to fly well enough to be released into the wild,” said Christie Tipton, chief habitat curator at Grandfather Mountain. “In long-distance flight, he’d start to veer sideways, so he wouldn’t be able to fly straight enough to catch his prey.”

As Tipton was already seeking a counterpart for Griffin, a contact from the U.S. Fish and Wildlife Service suggested she try the Audubon Center for Birds of Prey in Maitland, Fla., where Ajax had since been moved.

“They thought he’d do really well with Griffin, because he seemed pretty laid back in the flight enclosure,” Tipton said.

Tipton and staff made the trip shortly thereafter, transporting the young eagle from Florida to Linville over the course of two days. Understandably, Ajax wasn’t in the best of moods upon arrival. The extended road trip had ruffled his feathers.

During his standard health check, he showed his feisty side, snorting and snapping at his handlers, even while hooded, prompting Tipton and staff to name him after the fabled Greek warrior.

“We were looking for a name that would go with Griffin, for one thing,” Tipton said. “We started considering Greek names, something that felt strong — especially after he turned out to be so feisty.” 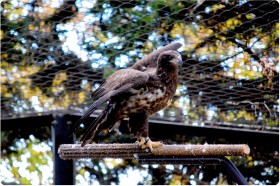 “Griffin’s done awesome,” Tipton said. “I’m so proud of him, because he’s been so calm. He’s just looking at Ajax, like, ‘What is wrong with you, dude?’ He doesn’t really like it when Ajax gets too close to him and sits beside him, but other than that and a couple altercations over food, they’re doing really well.”

Griffin was brought to Grandfather Mountain from Nebraska in March 2013, after he suffered a severe head trauma in the wild, leaving him blind in his right eye and deaf in his right ear. While he now has a clean bill of health, veterinarians and habitat staff were never able to identify his age.

“Once eagles are adult, you can’t age them,” Tipton said, noting that bald eagles’ white plumage doesn’t develop until they’re around 5 years old. “We know Griffin was an adult when he came to the mountain, so we’re guessing he’s at least 7.”

As such, Ajax, who hasn’t yet “gone bald,” offers Tipton and company a unique opportunity to observe how bald eagles age. But although he’ll be only 2 years old in January 2016, Tipton said he’s pretty much reached his full size.

“By the time they become fledglings, they’ve already reached 95 percent of their adult size,” she said. “It’s amazing how fast they grow.”

Tipton has also been amazed at one of Ajax’s other qualities.

“He’s a talker,” she said. “I think he’s going to be one of our loud eagles that yell at us all the time.”

Folks can see — and hear — for themselves at Grandfather Mountain in Linville.

For more information on Grandfather Mountain and its animal habitats, including behind-the-scenes tours, call (828) 733-2013.